Voice analysis is one of the most promising technologies for identifying certain types of behaviour or detecting the onset of certain diseases.

Carnegie Mellon University’s SimSensei project uses voice analysis and deep learning techniques to detect depression. Researchers are trying to match vocal characteristics with the likelihood of patients attempting suicide again. Early results show that people with a soft, breathy voice, not those with tense or angry voices, were more likely to reattempt.

Other researchers have built algorithms that use the voice to help identify everything from Parkinson’s disease to post-traumatic stress disorder. For many, the greatest promise of this technology sits at the intersection of voice analysis and mental health and the hope of creating an easy way to monitor and help those at risk of relapse.

People with mental health conditions are monitored closely when they’re in the hospital, but daily life can wear people down slowly and subtly. In that kind of situation, a person once diagnosed with depression may not even realize that they’ve become depressed again. It would therefore be very useful to have a sensor in your pocket acting as an early-warning system.

CompanionMx is a company that has developed a platform for proactive mobile mental health monitoring. Founded by the Massachusetts Institute of Technology Media Lab and clinically validated at Harvard Medical School hospitals and several veterinary clinics, the Companion™ system uses active voice monitoring and passive monitoring of other smartphone metadata to continuously produce acoustic and behavioural biomarkers that predict the fundamental symptoms of mood and anxiety disorders. The software has been used by more than 1,500 patients and dozens of physicians and researchers. 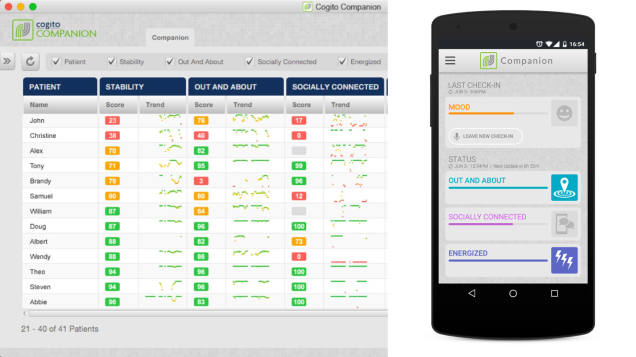 Other startups, such as Sonde Health and Ellipsis Health, have similar goals. The idea is to analyze the voice, using artificial intelligence technologies, to detect symptoms or measure vital signs that can help health professionals to detect a disease early or to assess the psycho-physical well-being of people.